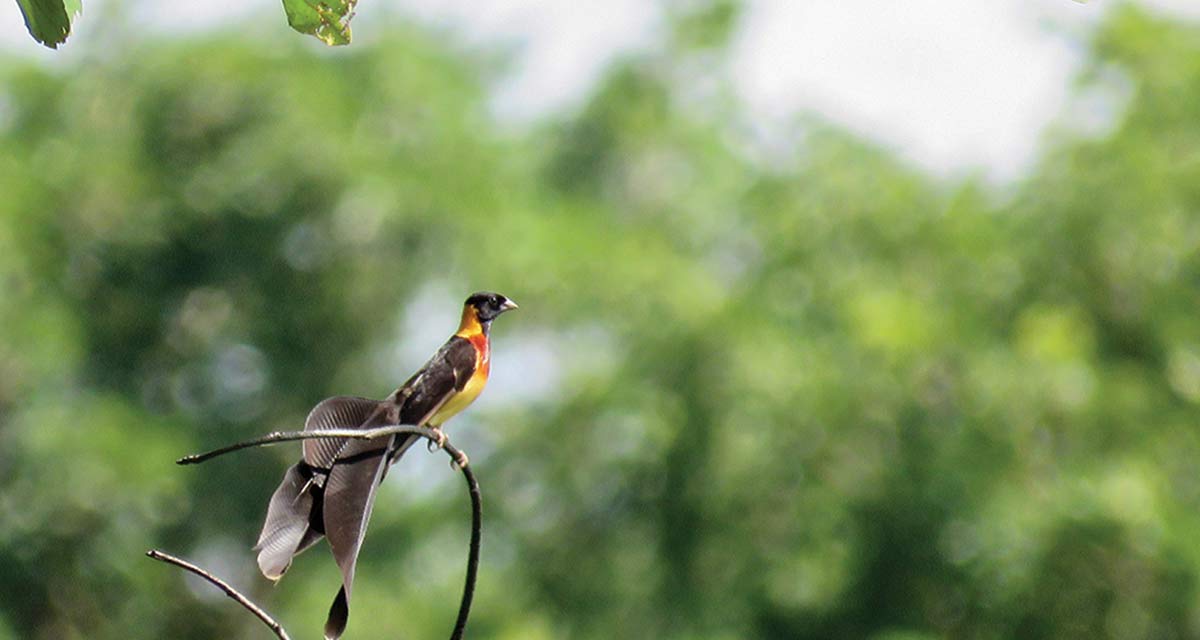 An early morning trip to Marlborough and other vlei’s will give us a chance at locating African, Spotted, Corn and Striped Crake, as well as Streaky-breasted Flufftail. Other species to look out for are Rosy-throated, Cape and Yellow-throated Longclaws. As the sun rises over the moist grassland, flocks of Amur and the odd Western Red-footed Falcons abound, along with them floating cautiously are the Pallid, Montagu’s, Western Marsh and African Marsh Harriers. The air becomes alive with the sound of displaying Pale-crowned, Zitting, Red-faced and Croaking Cisticolas as well as Black Coucals and African Crake. Secretive birds such as Black-rumped Buttonquail and African Quailfinch can be flushed under ones foot.

There are some fantastic ‘road side’ birding spots en-route. A brief stop just outside the town of Marondera in a field filled with Red Hot Pokers (Kniphofia sp.) should produce some excellent birds like Western Violet-backed, Variable, Miombo Double-collared and White-bellied Sunbirds! There are good populations of stunning Common and Orange-breasted Waxbills. A short distance ahead offers a different habitat of rank vegetation and species such as Levaillant’s Cisticolas, Broad-tailed Warblers, Red-collared and Yellow-mantled Widowbirds.

A stop at Gosho Park for more of the Miombo specials can avail Wood, Tree and Striped Pipits depending on the time of the year.The primary miombo woodland is a haven for Spotted Creeper, Cabanis’s Bunting, Green-backed and Brown Backed Honey Birds as well as Collared Flycatcher and Miombo Rock Thrush.

Good grasslands and woodlands en route will be scrutinised for Harriers (Western Marsh and Pallid) and other specials, however as we approach the Eastern Highlands we will similarly be looking at some of the Montane Grassland and mid-high altitudinal Montane Forest species

We will position later in the afternoon at Mtarazi Falls with many small stops en route at different habitat types.

We will use the morning to look for Scarce and Mottled Swifts, Black-fronted Bush-shrike, Red-faced Crimsonwing, Green and Red-throated Twinspot, White-eared Barbet, Livingstone’s Turaco, Wailing Cisticola, Robert’s Warbler, Chirinda Apalis and Bronze and Malachite Sunbirds amongst many others before returning for a brunch and packing to continue to the Honde valley directly below us for amazing birding en route to Aberfoyle Lodge.

We depart from the lodge early. Anchieta’s Tchagra is our main target and it inhabits the Wamba swamp. Other species we may also observe are Dark-capped Yellow Warbler, Sedge Warbler, Little Rush Warbler, African Reed Warbler and Lesser Swamp Warbler as the sun lures them from their thick reed beds.

15km away is a small remnant patch of Lowland Evergreen Forest. Species to look out for are are Pallid Honeyguide, Narina Trogon, Bat Hawk, Green and Red-throated Twinspot, Green-backed Woodpeckers and Red-capped Robinchat. We have to be quick to spot the Yellow-streaked Greenbuls gleaning insects off the branches as they flick their wings and call repeatedly. This is where we will have a short breakfast before heading to Katiyo Tea Estates a furher 30Km distant.
Birds to look out for en route are Black-winged Bishop, Short-winged Cisticola, Moustached Grass Wabler and Western-banded Snake Eagle.

After Lunch followed by a short rest we sneak off into the Forest for a modest walk and tidy up on a few of the forest birds and locate back to Aberfoyle Lodge where Palm-nut Vultures, Mountain Wagtails, Red-throated Twinspot, Eastern Bronze-naped Pigeons, Singing Cisticola, and Blue-Spotted Wood-Dove amongst other species will be looked for in the lodge precincts

We will be traversing the area for any birds not seen to date knowing the next morning we have to leave very early.

Mopping up on any birds we might have missed we will start the incredibly scenic drive toward the
small border town of Mutare.

Just before we reach there we have some very productive lower Miombo woodlands by Mutare. The woodlands are blessed with Spotted Creeper, Rufous/Cinnamon Breasted Tit, Miombo Tit, Miombo Rock-thrush, Green-capped Eremomela, Grey Penduline-Tit, Southern Hyliota, Lazy Cisticola, Wood and Striped Pipits as well as Cabanis’s Bunting, and plan to have our lunch somewhere in this area.

There is a chance of locating Mottled Swift and Boulder Chat on the granitic outcrops just outside Mutare and also depending on our timings, we can search for Black and Scarce Swift and some of the eastern district specials on arrival in the Vumba where we hope to be in place later in the day.

After some muffins and fresh coffee we head off in search of the highly localised Swynnerton’s Robin, Stripe-cheeked Greenbul and Red-faced Crimsonwing. The forest floor also boasts Lemon, Tambourine and Blue-spotted Doves, whilst the canopy produces the massive African Olive Pigeon, Eastern Bronze-naped Pigeon and stunningly colourful Black-fronted and Olive Bushshrikes. The various Sugar Bushes and Tree Fuchsias produce many species of sunbirds; such as Gurney’s Sugarbird, Variable, Olive, Bronzy and Malachite Sunbirds.

Whilst consuming lunch the Roberts’ Warblers chatter to each other in the thickets and one must be careful to look for the tiny Yellow-throated Woodland-Warbler gleaning for insects in the tree canopy however depending on how the day’s sightings are going and what species we had encountered on the Aberfoyle and Honde Valley side we might go down to the Burma Valley for Broad-tailed Paradise Whydah and Twinspot Indigobird amongst some other species that could be needed for this final days listings.