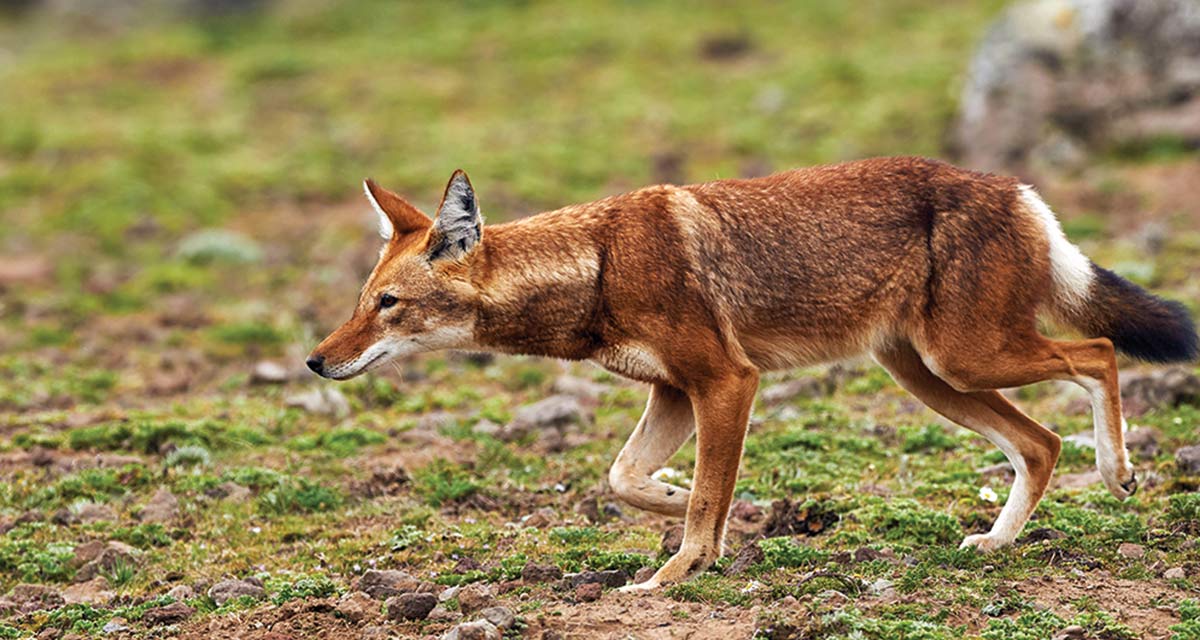 Located 400km southeast of Addis Ababa, Bale Mountains National Park contains a spectacularly diverse landscape. The high altitude, afro-montane Sanetti Plateau rises to over 4,000m and includes the highest peak in the southern Ethiopia highlands. This undulating plateau is marked by numerous glacial lakes and swamps and surrounded by higher volcanic ridges and peaks. The southern slopes are covered by the lush and largely unexplored Harenna Forest. Bale Mountains National Park is the ultimate destination for hikers, wildlife watchers, culture and nature enthusiasts, bird watchers and more! Explore one of the highest parks in Africa by horseback, go fishing or experience an authentic community trying local coffee and honey! One of the best sites to spot the rare and endangered Ethiopian Wolf is on the spectacular Sanetti Plateau as the sun rises.

The Ethiopian wolf is the rarest canid in the world, and Africa’s most threatened carnivore. The closest living relatives of the Ethiopian wolf are grey wolves and coyotes. The Ethiopian wolf ancestor crossed over from Eurasia during the Pleistocene period less than 100,000 years ago, when sea levels were lower and Africa and the Middle East were connected. At the time, the highlands of Ethiopia were predominately Afroalpine grasslands and heathlands, and these habitats were ideal for many small mammals, particularly grass rats and molerats. This Afroalpine environment and its abundant rodents drove the Ethiopian wolf evolution morphologically into a specialized rodent hunter with an elongated muzzle, long legs and a distinctive reddish coat, with white markings and a darker tail tip. Male Ethiopian wolves weigh between 14 and 20kg, while the weight of adult females ranges from 11 to 16 kg.

Explore all habitats of the Bale Mountains National Park as you trek across the home of the Ethiopian wolf, mountain nyala, giant molerat and Bale monkey. Experience stunning Afroalpine mountains and natural scenery while heading deep into the heart of the Sanetti plateau – a floating land.

Hike amongst rock pinnacles etched out of the lava flows by millions of years of ice and winds, and pass waterfalls and alpine lakes. Camping in the Harenna forest may reward you with a sighting of the elusive animals that live there. Wildlife that can be seen along the way includes the olive baboon, warthog, rock hyrax, Starck’s hare, klipspringer, grey duiker, African wild dog, giant forest hog, leopard, lion and birds of prey.

The Bale range in Africa is made up of mountains built upon mountains. Formed tens of millions of years ago by successive outpourings of lava, the Sanetti Plateau towers over southeastern Ethiopia. The plateau spreads across thousands of square kilometers; with much it at 3,000 meters (10,000 feet) above sea level, it is the most extensive high-altitude feature in Africa.