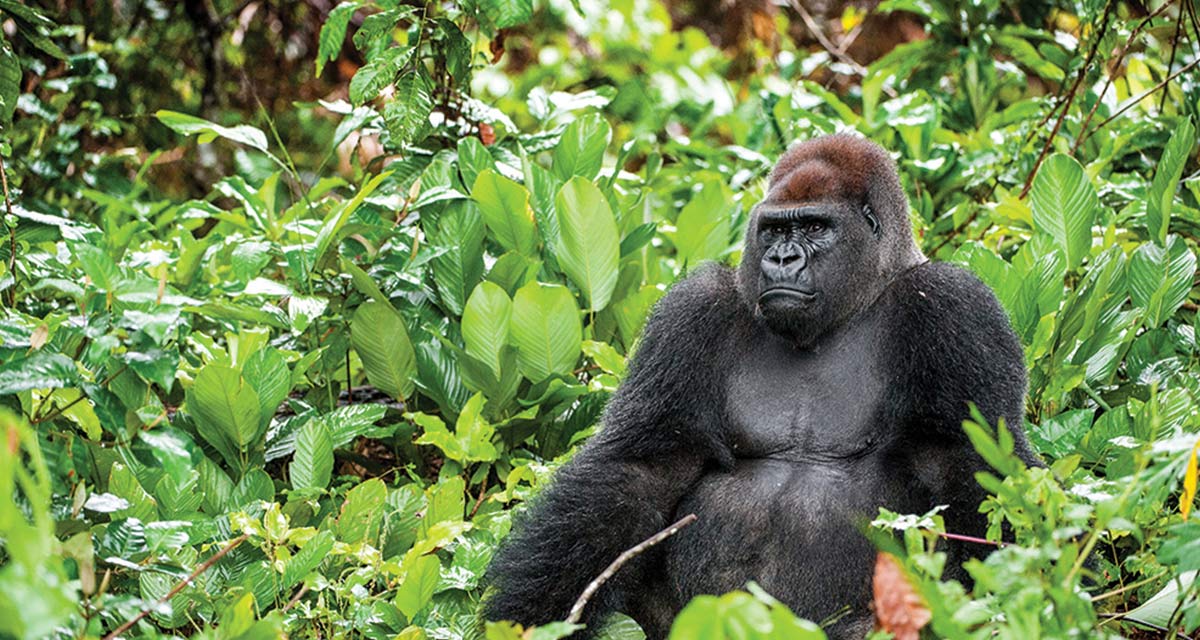 Good wildlife, spectacular birding and new species being discovered all the time make Gabon an exciting, pioneering front. Loango National Park has beaches, whales and rainforests. Lopé National Park is good for plants, birds and primates alike. Famous for “surfing hippos” and beach-loving elephants, there are nearly 200 mammal species including large numbers of western lowland gorillas, 600 species of birds and more than 8,000 plant species – new ones are being discovered all the time.

Loango National Park is situated between the Nkomi and Ndogo Lagoons and covers an area of 1550 km². This area was made famous by Mike Fay and Nick Nicols from National Geographic, who called the Loango the “land of surfing hippos”. The forests are home to an enormous variety of fauna and flora. Remains of western explorers can be seen in some piles of empty oyster shells and a couple of graves near to the only lodge in the Loango National Park. Most of the exploring of the park is done by boat, on foot or from a vehicle. The climate is quite humid and laundry takes a long time to dry. This area is for the intrepid explorer only and cannot be described as a honeymoon beach resort or a typical southern or east African safari camp. There is no doubt that visiting this area is an exciting and adventurous experience never to be forgotten.

In the rainy season, from approximately September to May, you can view forest elephants and forest buffalos roaming on the beaches of Loango National Park, a sighting not found easily in today’s world.

From mid-July to mid-September, humpback whales (Megaptera novaeangliae) visit the waters around Loango Lodge as they migrate from their low-latitude summer feeding grounds to more tropical mating and calving areas.

The smallest of the gorilla subspecies, the male western lowland gorilla weighs up to 160 kilos, reaches a height, when standing, of 5ft 6 inches, with the females about half the size. These gorillas can be distinguished by their nose which has a continuous heart shaped ridge around its nostrils, shorter hair, and wider skull. Like most gorillas, the western lowland gorilla sleeps at night on the ground in nests constructed from branches and leaves. Recent research has shown they have the capacity to use tools and they have been observed testing the depth of a river before deciding whether to cross. They are notoriously more challenging to track and habituate due to their large home range and constant movement. Compared to mountain gorillas, their group sizes are small (usually about 5 individuals), but they are not territorial and groups usually overlap home ranges.

Gabon’s Loango National Park (one of 13 in the country) is home to a world-class fishery. Here, the warm equatorial waters of the Atlantic Ocean, white beaches, lagoons, tropical forests, savannahs and amazing wetlands come together to create one of Africa’s last great coastal wildernesses. This is a place where you can be fishing the near-shore waters for tarpon while elephants and hippos roam the beaches in front of you. Cubera snapper, tarpon, African threadfin, jack crevalle, whitefin jacks, barracuda, rouge, Senegal kob, guitar fish and the elusive san crevalle (on fly for the challenger) are just a few of the species you can target while fishing from our boats or on the beach. We actively promote and practice a catch-and-release policy to help protect this African fishing paradise.