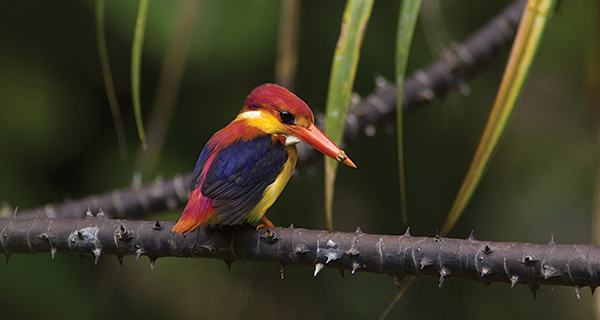 Lemurs, baobabs, rainforest, desert, hiking and diving; Madagascar is a dream destination for outdoors enthusiasts – half the fun is getting to all these incredible attractions. Madagascar, an island country lying off the southeastern coast of Africa, the fourth largest island in the world. The Malagasy
people, do not consider themselves to be Africans, but because of the continuing bond with France, that resulted from former colonial rule, the island developed links with the French-speaking countries of western Africa. The animal life and vegetation of the island are equally anomalous.

This island’s isolation has caused many zoologically primitive primates to survive and evolve into unique forms. About 40 species of lemurs are indigenous to Madagascar.

Birds are numerous and include guinea fowl, partridges, pigeons, herons, ibis, flamingos, egrets, cuckoos, Asian robins, and several kinds of birds of prey, to name a few. There are about 800 species of butterflies, many moths and a variety of spiders. The only large or dangerous animals are crocodiles, which occupy rivers and snakes.

Inland water contain tilapia, rainbow trout and black bass. Marine fish and crustaceans abound on the coasts and in the lagoons, estuaries and even in some uplands streams. They include groupers, giltheads, tuna, sharks, sardines, whitings, crayfish, crabs, shrimps, mussels and oysters.

Antananarivo, the tongue twisting capital of Madagascar, is often overlooked by travellers, which an opportunity missed, but not with us. It’s busy and traffic is chaotic but if you look beyond this, you’ll find a colourful city full of charm and history and incredible views at every turn. We will stay the night here when we land and the next day charter a flight to the beautiful Anjajavy Lodge in the north.

On an isolated peninsula and enchanted on the northwest coast of Madagascar, Anjajavy le Lodge awaits your discover. Set along on sandy beaches azure waters and encircled by a fabulous forest reserve, Anjajavy reflects the rich diversity and untouched beauty of Madagascar and the natural warm hospitality of its people.

Classified by WWF as a global priority in terms of conservation, the eco-region of deciduous dry forest of the north-west area of Anjajavy is a shelter to communities of rare and endemic faunal and floral species. Through its diversity, this natural environment is home to a great variety of plants and animals which are unique and harmless in some specific ecotypes. International naturalist know it, and few places in the world offer authentic contact with nature as intimate and safe as the Anjajavy peninsula.

Inventories have documented the presence in the reserve of more than 134 different bird species.Numerous magnificent birds, rare and endemic, can be observed by naturalists and birdwatchers, the most enthusiastic of which know the international reputation of Anjajavy.

The gardens and immediate surroundings of the lodge are not to be outdone, with a diverse array of colors such as the metallic green Sunbird (Nectarnia souimanga), the red Madagascan Fody (Foudia madagascariensis), the yellow headed Sakalava Weaver (Ploceus sakalava) as well as a kaleidoscope of shapes such as the Malagasy Flycatcher
(Terpsiphone mutata) and its thin tail, the Madagascan Hoopoe (Upupa epops marginata) and its speckled crest or the Sickle-billed Vanga with its long hook-tipped bill. Almost daily, flocks of Madagascan Grey-headed Lovebirds (Agapornis cana) dance a ballet whilst feeding on seeds on the lawn as guests enjoy their breakfast nearby.